Warning: count(): Parameter must be an array or an object that implements Countable in /home/jugaadin/public_html/manmohan/2018/news/wp-content/themes/ranzim/header.php on line 249

India ranks globally 3rd in the Startup ecosystem and also in terms of the number of Unicorns, said Dr Jitendra Singh

India is a country of diverse cultures and festivals. And, festivals specially are the occasion which binds all of us together, as it gives us the leisure time and break from our work and stressful life.

In the recent years, it has been observed that festivals have adopted a new version of celebrations due to modern mindsets and the civilisation of technology.

Though, there are wide range of festivals in India, but the major celebrations of festivals begins in the month of October and November, embarking with the nine days holy festival called Navratri.

Navratri is that festival on which 'the highest, powerful and sacred hindu diety' is worshipped known as 'Durga or Shakti'. Navratri, as its name symbolises is a festival of 9 nights and 10 days. Goddess Durga is an epitome of energy in all forms, present in the Universe.

Inspite of having many modern reasons for the celebration of this festival, the two major and important mythological reasons are :

• Killing of Mahishasura, the fiercest demon, who didn't understand the power of a female, until, goddess Durga showed him to his final abode by defeating him in the battle, where she promised him to marry him if he wins the battle.
The assassination of Mahishasura also symbolises the end and removal of all evils from the Earth and that's why the tenth day is celebrated as 'Vijaydashmi', day of the victory.

•Another reason for the celebration of this festival, is Hindu lord, the legend, Lord Rama fasted and worshiped Goddess Durga for nine days and won over the ten headed Ravana by killing him, and the day is celebrated as Dusshera.

According to Puranas, devi Durga has 108 names, but this nine day festival is celebrated to worship nine forms of Durga, which has its own symbolism and meaning.

The first among these Nav - Durgas is

1) Shailputri : She is the prime energy of three Hindu God (Brahma. Vishnu and Mahesh) and is the daughter of Himalaya. The significance of her worship is that, it provides with the spiritual enlightenment to worshipper.

The second one is called 'Brahamcharini'. She is worshipped on the second day of Navratri. The idol of this form of goddess is extremely gorgeous, as she personifies the love and loyalty. This form of Durga is the store house of knowledge and showers extreme of peace, prosperity and grace to all her devotees.

On the third day, goddess 'Chandraghanta' is worshipped who is a symbol of tranquillity and prosperity. She has a golden charm on her face and rides a lion. She is an epitome of bravery and winning all the battles against evils.

On the fourth day, creator form of the Navdurga known as 'Kushmanda' is celebrated. She believes to be the giver of light to the whole Universe, otherwise this would have been dark, today as well.

Fifth day, is dedicated to the celebration of the mother of Lord 'Kartikeya', who was choosen to be the commander in chief for the battle against all the demons.

Her idol symbolises the motherly form of Goddess as she holds her child 'Skanda' while riding a lion. The interesting fact is that it is said and believed, that the one who chants this form of Durga can turn his ignorance into the ocean of knowledge.

On the sixth day, 'Katyayani' form of mother Durga is worshipped and celebrated. This form of goddess is a blessing for saint 'Katya', who wished a daughter and goddess Katyayani was born to him as an avatar of Durga, which is the greatest learned source for mankind that all daughters are 'Shakti and Durga' swaroop.

On seventh day, the idol who is the destroyer of darkness and ignorance is celebrated known as 'Kaalratri'. Her ride is a faithful donkey and her appearance is the wildest form of female diety with dark complexion and disheveled hair and a posture of fearlessness.

Mahagauri, whose worship is instantly fruitful and has unfailing power is worshipped on eight day of Navratri. The maidens in India considered to worship her to find the best life partner, as she won the heart of God Shiva, by her constant and perservance way of devotion.

Siddhidatri is the ninth form of Goddess. She is the giver of all the 'sidhis' to mankind. She is grateful goddess who turned the half body of Shiva into the goddess form and is recognised as 'Ardhanarishvar'. She is believed to be the grantor of 'twenty six' different wishes to her devotees. 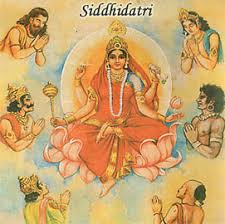 Worshipers and devotees all over the India celebrate this festival with modern touch to the traditional aspect. The girl child is worshiped by offering various foods and gifts, to her on the last day of Navratri fast. All nine nights, Garba, a traditional Gujarati dance form is done by devotees and they are dressed up in magnificent and vibrant clothes, celebrate the aura and grace of goddess Durga.

And, the interesting fact about fasting during these nine days is that, the fasting is no more boring. Many interesting recipes has been created in recent times, which makes the festive - fasting season, a lot more luscious and delightful.

And, with this festival is celebrated with great pomp and show.

I wish you all a very happy Navratri on the behalf of complete Jugaadin News team
May Goddess Durga showers her love and blessings, always onto you