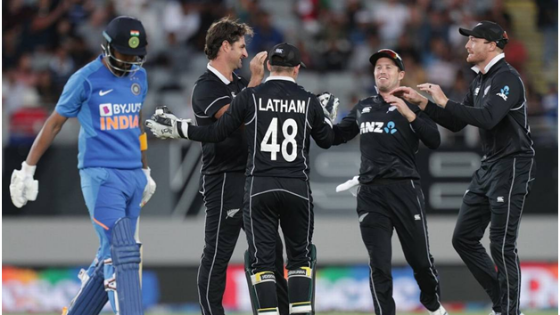 On Saturday at EdenPark, New Zealand beat India by 22 runs. India won the toss and chose to bowl first but the New Zealand opening batsman gives the good start to New Zealand and scored 93 runs for the first wicket. Martin Guptil (79) and Taylor (73)* scored a half-century for New Zealand. New Zealand scored 273 runs by losing their 8 wickets in 50 overs and gave the target of 274 runs to India.

In reply, Indian batsmen unable to give the good start to India, they lose their 5 wickets in just 96 runs. But after that Navdeep Saini (45) and Jadeja (55) scored 76 runs for the 8 wickets and take India close to the target but unable to give a win to India. Shreyas Iyer (52) also scored Half Century for India. But after all that India lost the match by 22 runs, and lose their 1st series after winning the 12 series continuously. New Zealand takes lead by 2 – 0 in 3 ODI’s Match series.